Three years ago, the mother was three times older than the daughter. After nine years, she will be only twice old.

How old is the mother (and daughter)? 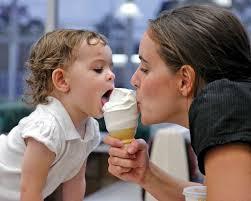