Determine how many nuts gathered Milena and many boys divided the nuts. 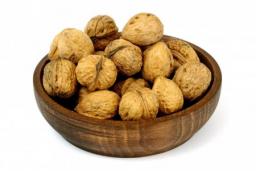