The summer camp is 41 cottages. Rooms are for three and for four in them. How many of the 140 campers lives of three? 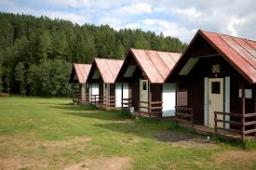