In an isosceles trapezoid ABCD is the size of the angle β = 81°
Determine size of angles α, γ and δ. 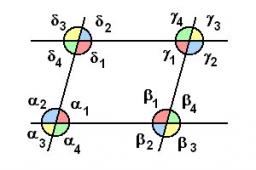