How many three-digit odd numbers divisible by 5, which are in place ten's number 3? 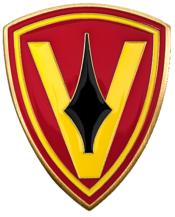