What percentage of the Earth's surface lies in the tropical, temperate, and polar zone?
Individual zones are bordered by tropics 23°27' and polar circles 66°33'. 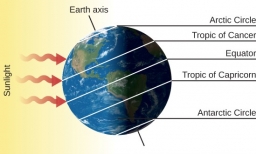