Find the probability that if you roll two dice, it will fall the sum of 10, or the same number will fall on both dice. 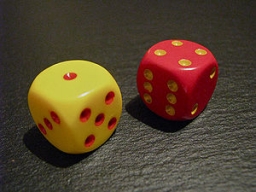