Find the probability that a number divisible by two or three will fall when the dice are rolled. 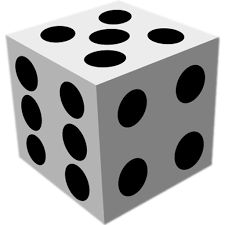