Calculate the tenth member of geometric sequence when given: a1=1/2 and q=2 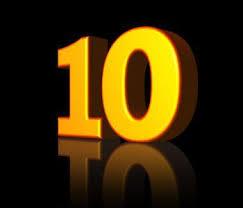