The tourist wanted to walk the route 16 km at a specific time. He, therefore, came out at the necessary constant speed. However, after a 4 km walk, he fell unplanned into the lake, where he almost drowned. It took him 20 minutes to get to the shore and recover from the horror. To reach the finish in time, he had to add a little (at least the laundry had dried up) on the rest of the route - increase the speed by 0.5 km/h. What was the speed at the beginning? 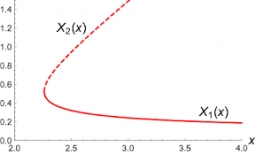