Pedestrian out with a speed of 4 km/hour from city center and after 1hour and 10 minutes came after him cyclist at speed of 18 km/h. At how many minutes he catches up with pedestrian? 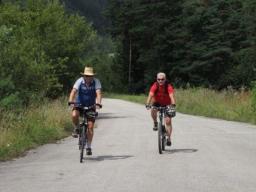