Four people should sit at a table in front of a row of 7 chairs. What is the probability that there will be no empty chair between them if people choose their place completely at random? 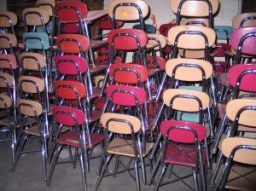