The mummy wiped out the square wipes and the veil was next to each other on the cord stretched out between the two trees. She used a cord of 7.5 meters in length, requiring about 8 dm on each side of the trunk. All wipes are 45 cm wide. Among the wipes and trunk the mummy leaves a gap of at least 10 cm, the cloths do not overlap it and do not have them folded. How much wipes can hang up on a stretched cord? 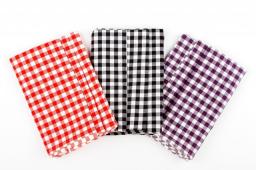