Television is the fifth most expensive and tenth cheapest TV. How many different TVs are in stores? 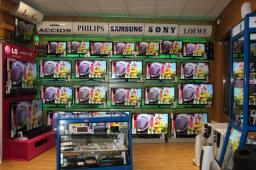