Two workers work together and perform the job in 12 hours. If one has done half the work and then the second worker next half of the work it will take 25 hours. How long would it take job them separately? 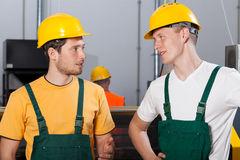