Find out whether given sizes of the angles can be interior angles of a triangle: 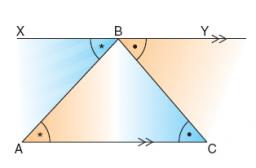