Calculate the average speed of passenger travel from arrival to leaving the airport. 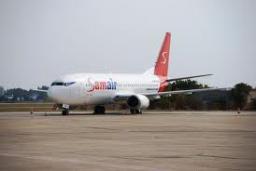