One painter paint the nursery in 10 days, the second in 8 days. How many days will the nursery be painted if they work together? 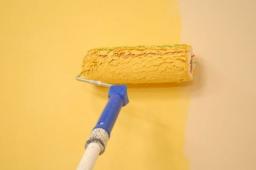