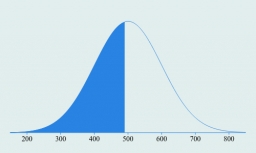 Dr Math
B - rope with lower std.deviation is better quality;