On the 400 m athletic oval, two athletes started back to back from the same level. After the starting shot, they both ran away from each other at the same time. Athlete A ran at 15 km/h, and Athlete B ran at 17 km/h. A) in how many seconds did the athletes meet each other? B) how many meters did each athlete run before they met? 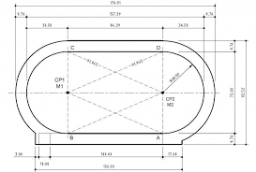