How many parts of line divide 5 (different) points that lie on it? 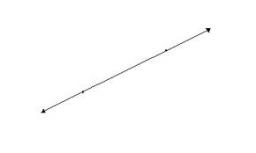