Perimeter of rectangle is 48 cm. Calculate its dimensions if they are in the ratio 5:3 (width:height) 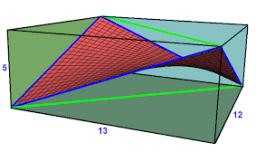