On the skiing meeting came four friends from 4 world directions and led the next interview.

We know that one statement is not true determine what. Who came from the north and who from the south? 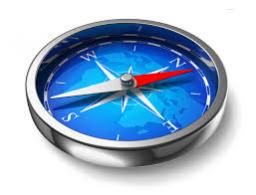