In Kostelec above Black Forest, they made a record-long hot dog. When slowly moved it to the square, one of the spectators decided to measure its length: the size of his footprint is 28 cm; he measured 20 feet in travel direction, counted 5 feet against the direction. How long was the hot dog? 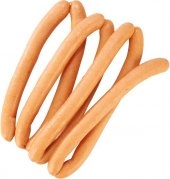