A square is inscribed into an equilateral triangle with a side of 10 cm. Calculate the length of the square side. 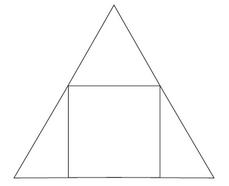