Between the two ports on the river is going steamship. The journey there and back takes 8:42. Downstream steamship traveling at 20 km/h, upstream 9 km/h.

What is the distance between the ports? 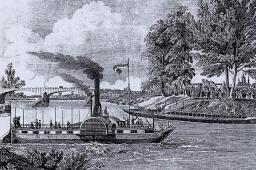