Divide 288 in the following ratio 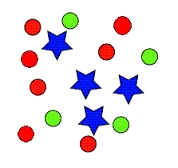 Tips to related online calculators
Check out our ratio calculator.
Do you want to perform natural numbers division - find the quotient and remainder?