From a cliff of 150 meters high, we can see the ship at a depth angle of 9° at sea. How far is the ship from the cliff? 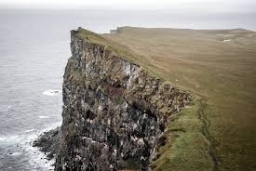