The mowers were to mow two meadows, one twice as big as the other. In the first half of the day, they divided into two equal groups. One continued to mow a larger meadow and cut it all by the end of the day. The second group mowed a smaller meadow but did not mow it all until the end of the day. The mowers cut the rest the next day by one mower for the whole day. How many mowers were there? (We assume that the mowing time in the first and second half of the day was the same, and the mowing power was the same. ) 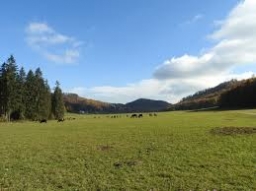