Daily passes the same track section 8 pairs of trains with average 2400 passagers. How many people average travel in one train? 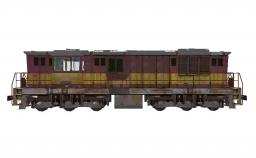