How many girls attending school altogether if 470 girls has blue eyes? 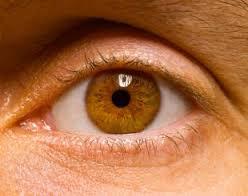