Letter game Logik is a two player game, which has the following rules:
1. The first player thinks five-letter word in which no letter is not
repeated.
2. The second player writes a five-letter word.
3. The first player answers two numbers - the first number indicates how many letters written word coincides with the imaginary word, and is also on the correct position; the second number indicates how many letters written word is contained in the imaginary word, but is not the right place.
4. Steps 2 and 3 are repeated until the second player imaginary word guess.
Recording one game of two friends looked like this:
SONET 1 2
MUDRC 0 2
PLAST 0 2
KMOTR 0 4
ATOLY 1 1
DOGMA 0 2

The next move was meant by the word guessed. Determine which word
it was.

Note:
Our presented solution contains a program in PHP language, which will solve the given combination of letters - by brute force, quickly and painlessly. 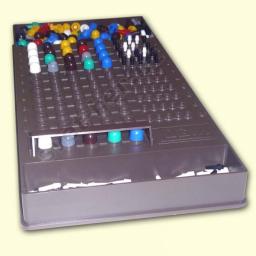 
Tips to related online calculators
See also our permutations calculator.
Would you like to compute count of combinations?