Gray wolf kept in his tent turtles Žofka and Julka, which together have 200 years. After 50 years will Julka 2 times older than Žofka. How old are the turtles? 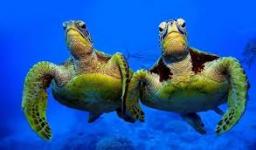