In the competition for the heaviest man was 5 competitors. The first three together weighed 553 kg. What is the minimal weigt of winner, if a contestant weighed with an accuracy of one kilogram. 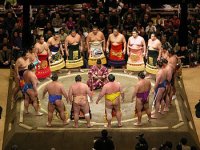