In how many ways can be placed 6 athletes on the podium at the Olympics? Depend on the color of the metal. 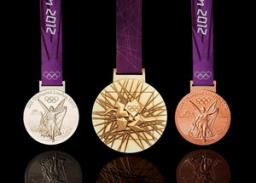