We toss coin, every throw fits lion or a virgin with equal probability 1/2. Determine how much at least we have to make throws that with probability 0.9 lion fell at least once. 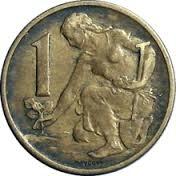