Calculate the side a, the circumference and the area of the regular 5-angle if Rop = 6cm. 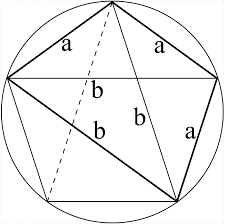