5 km long road begins at an altitude 500 meters above sea level and ends at a altitude 521 ASL. How many permille road rises? 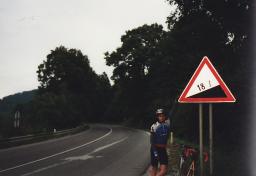