Determine the half life of bismuth, when bismuth weight from the original weight of 32 g was only 2 grams in 242 minutes. 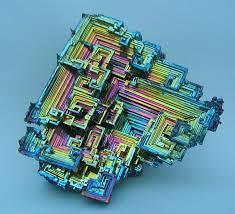