Divide 570 euros to three friends so that first will get 50 euros less than the second and third twice more than the first. How many euros will get everyone? 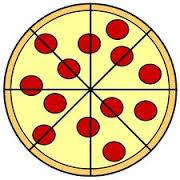