A different amount of water is poured into each of the three identical vessels. In the first vessel, water fills 30% of its volume and in the second vessel 40% of its volume. The third container contains 19 liters of water. If we distributed the water from all the vessels equally, the water in each vessel would fill two-fifths of its volume.

What is the volume of one container? 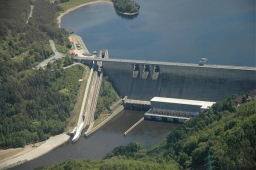