The population grew in the city in 10 years from 30000 to 34000. What is the average annual percentage increase of population? 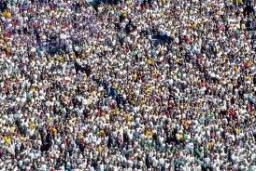