Florist has 84 red and 48 white roses. How many same bouquets can he make from them if he must use all roses? 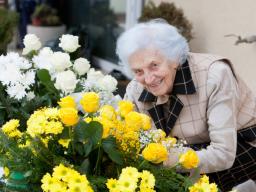