The cable car is 2610 m long and rises at an angle of 35°. Calculate the height difference between the lower and upper station of the cable car. 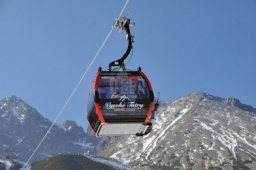