The car started in fog at a speed of 30 km/h. After a 12-minute drive, the fog dissipated, and the driver drove the next 12 minutes distance, 17 km. On the last 17 km long again, the driving conditions deteriorated, and the driver drove at a speed of 51 km/h. a) Calculate the distance of the first section, the speed on the second section, and the time on the third section. b) Construct the graph distance vs. time t. c) Calculate the average speed for the first two sections and the average speed on the last two sections. When can the average rate calculated as the arithmetic mean of the individual speeds? Judge answer. 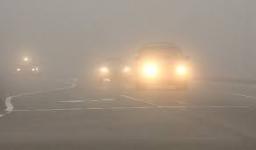