Ten persons, each person makes a hand to each person. How many hands were given? 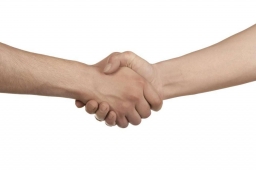