Mice had built an underground house consisting of chambers and tunnels:

How many chambers could at least have a mouse house? Sketch how chambers can be interconnected.... 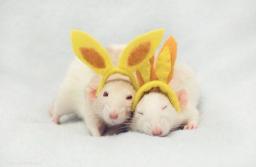