Three friends squirrels together went to collect hazelnuts. Zrzecka he found more than twice Pizizubka and Ouska even three times more than Pizizubka. On the way home they talked while eating and was cracking her nuts. Pizizubka eaten half of all nuts
which collected, Zrzečka third of all its nuts and Ouska quarter of his own. At home squirrels discovered that they were together left 196 nuts. How many nuts collect each of squirrels? 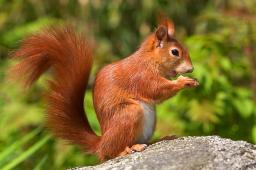