How many lines can be draw with 8 points, if three points lie on one line and the other any three points do not lie on the same line? 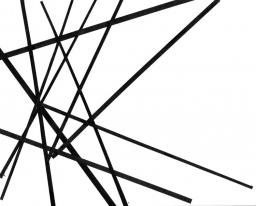