Calculate the sides of a right triangle if the length of the medians to the legs are ta = 21 cm and tb=12 cm. 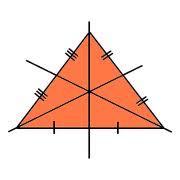